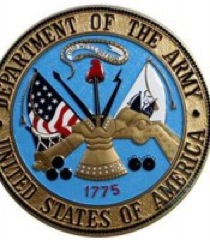 Robbins, NC
1st Sgt. Howard Wilson Craig, US Army Ret., age 64 of Robbins died Sunday (January 2, 2010) at Randolph Hospital.
Funeral services will be 2:00 PM Thursday at Bethel Church of God conducted by the Reverend Bruce Harry, Reverend Jacelyn Jones and Reverend Terry Craig. Burial will follow with full Military Honors in the Waddell Memorial Chapel Cemetery.
A native of Montgomery County he retired from the US Army in 1985 after 22 years of service. After serving his country he went to work with the water plant in Robbins where he worked for many years until retiring. Most recently he had retired from the water department in Norwood . He was preceded in death by his wife Sandra Craig who died in 1985 his mother Melvie Burns Craig who died in 2010 and a granddaughter Cheyenne Craig.
He is survived by: sons: Ronald Craig and wife Christine of Clayton, Kevin Craig and wife Gindy of Seagrove; daughter, Tammi Craig of PA; father Marvin Craig of Robbins; sisters: Linda Sheffield of Robbins, Debra Garner of Robbins, Kathy Rosdol of Greensboro; brothers: William Edward Craig of Eagle Springs, Ronnie Craig of Robbins; grandchildren: Brittany, Cortney, Kaden, Robert and Spirit.
The family will receive friends at Kennedy Funeral Home from 6:00 - 8:00 PM Wednesday and other times at the residence of Kevin Craig.
Memorials may be made to: VFW Post 9245, 672 Reynolds Mill Road, Robbins, NC 27325 or to the American Cancer Society, P.O. Box 22718; Oklahoma City, OK 73123-1718.
Kennedy Funeral Home in Robbins is serving the Craig family.
Condolences: www.PinesFunerals.com