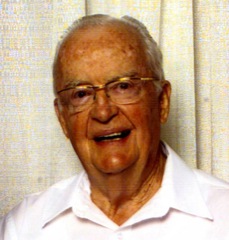 Austin W. Jepson, 93, of Whispering Pines, was born in LaCrosse, Kansas, February 10, 1916. He was the son of Kenneth Samuel and Ellen Frances Williams Jepson. He passed away Sept. 27, 2009, at his home in Whispering Pines.
He grew up in New Waterford, Ohio, and was a graduate of Ohio State University in Columbus, Ohio, and Wayne State University in Detroit, Mich. He began his teaching career in Bucyrus, Ohio, prior to being drafted into the Army for World War II.
Before going overseas, he married Catherine Odebia Dupree on Aug. 21, 1942. In the Army, First Lieutenant Jepson was a member of the 747th Armored Tank Battalion that landed on Omaha Beach on June 7, 1944. He was severely injured in that invasion. Austin was the recipient of a "Purple Heart" medal. After recuperating and finishing his European duty, he returned home in 1945.
At that time, Austin and Catherine made their home in Detroit, Mich., where he was teaching in the Detroit public schools until his retirement. In 1951, they moved to Mt. Clemens, Mich., where they lived most of their lives.
Austin was active with the Boy Scouts of America, the Explorer Scouts, president of the local PTA, and president of the Michigan Industrial Education Association. In the Mt. Clemens Masonic Lodge No. 6, he became excellent high priest for the Royal Arch Degree. He was an active member of the First Methodist Church of Mt. Clemens, Mich. He was also a Realtor.
After moving to Whispering Pines in 1986, he attended the Carthage United Methodist Church. He became a dual member of Masonic Lodge No. 6 in Michigan and No. 484 in Southern Pines. In the year 2000, Austin was presented with a 50-year Masonic membership pin. The Jepsons were members of the Country Club of Whispering Pines and enjoyed golfing and socializing there.
He is predeceased by his wife, Catherine Dupree Jepson; his older sister, Lucille Fuhrman; and grandson, Glenn W. Miller.
He is survived by a daughter, Catherine (Debby) Miller, and her husband, Jerry, of Whispering Pines; grandson, Kenneth, and his wife, Eliisa, of Reston, Va.; sister, Mary Jane Cameron and her husband, Bill, of Forest, Va.; wife's brother and sister-in-law, Horace and Jean Dupree, of Kinston; and one great-grandson, Sebastian Lee.
A graveside memorial service for the family will be held at the time of interment in the Maplewood Cemetery in Kinston.
The Fry and Prickett Funeral Home in Carthage is serving the family.
In lieu of flowers, the family requests that memorial donations be sent to FirstHealth Hospice Foundation, 150 Applecross Road, Pinehurst, NC 28374.
Condolences: www.fryandprick ett.com