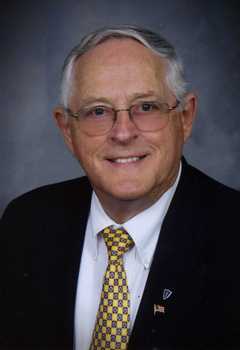 Bobby Wayne Brendell of Carthage, NC went to be with his Lord and Savior on Saturday, May 16, 2015. He passed away at First Health Hospice and Palliative Care in Pinehurst after dealing with cancer for 15 years.  His faith in Christ and his positive outlook were an inspiration to many who knew him.  He was a dedicated servant and deacon at First Baptist Church in Carthage.  He regularly visited the sick and shut-ins, and he ministered to many people, both in person and by sending numerous homemade cards.  At his log cabin home, Bobby loved gardening and over the years supplied many friends and family with vegetables from spring to fall.  His outgoing personality and generous nature have made an impact on many people in the Moore County area.

Bobby was born January 1, 1938 in Boone, NC to the late John Raymond Brendell and Mabel Tilley Brendell.  In addition to his parents, he was preceded in death by his brothers John R. "J.R." Brendell, Jr. and Harry Ray Brendell, and his sister Sallie Brendell Champion.  Bobby is survived by his brother James B. Brendell (Carol) of Sherrills Ford, NC, and twin sister Betty Brendell Kupiszewski (Bob) of Leavenworth, KS, and daughter Sandy Brendell Peckham (Bob) of Wake Forest, NC.  Also surviving him is his former wife and good friend, Glenna Brinkley Brendell.

Bobby graduated from Appalachian Teachers' College with a MA degree in Education.  Starting in 1963, he had a career of about 30 years with Moore County Public Schools as a science teacher, coach and associate principal, influencing many young lives.  He was the head coach for the Aberdeen High School Football team, which was the state champion in the 1964 Division 1A finals.

Visitation for friends will be held on Monday, May 18 from 6:00 to 8:00pm at Fry and Prickett Funeral Home in Carthage.  Funeral services will be on Tuesday, May 19 at 11:00am at First Baptist Church of Carthage with Reverend Ray Campbell presiding.  Burial will follow in Cross Hill Cemetery.  In lieu of flowers, donations may be made to First Baptist Church P.O. Box 824, Carthage, NC 28327 or to Samaritan's Purse, P.O. Box 3000, Boone, NC 28607, or SamaritansPurse.org.