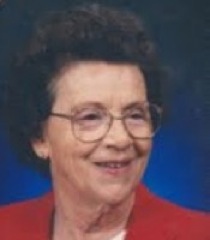 Carthage:
Buna Evans Blue McLeod, 84, died Tuesday, February 22, 2011 surrounded by her family and friends at Peak Resources - Pinelake Healthcare in Carthage.
Funeral service celebrating her life will be held at 11 AM, Saturday, February 26, 2011 at Eureka Presbyterian Church. Visitation will be on Friday, February 25, 2011 from 7 - 9 PM at Fry and Prickett Funeral Home in Carthage.
Buna was born at home in Carthage, NC on February 15, 1927 daughter of the late Calvin Benton Blue and Pearl Evans Blue. She attended Brevard College and transferred to UNC Chapel Hill where she graduated with a BA in Social Work. She taught school for one year at Eagle Springs and was a Social Worker in Moore County and Norfolk, VA for about five years. She was also a homemaker and helped operate the family tobacco farm.
Buna was a lifelong member of Eureka Presbyterian Church where she was President of The Women of the Church, sang in the church choir and was a Sunday School Teacher. She was also a member and held several offices including: Matron of Carthage Chapter # 154 Order of the Eastern Star, President of American Legion Auxillary and Eureka Homemaker's Extension Club. She was also a volunteer with the Moore County Literacy Council where she gave her time to read at Sandhills Farm Life Elementary School.
Buna is preceded in death by her husband, Hugh Martin McLeod; a son Donald McLeod; brothers, Calvin Blue, Willard Blue, and William Blue; sisters, Sylvia Blue Foy and Anna Blue Matthews.
She is survived by her son, Joe McLeod and wife, Mary of Carthage; daughter, Beth McLeod of Rural Hall and Carthage and her fiancAƒAC. Joe Shelton of Winston-Salem; sisters, Martha Blue Pierce of Kernersville, Alicia Blue Caison of Clinton, and Janet Blue Lilley of Monroe; grandchildren, Martin McLeod, Patrick McLeod, and Christopher McLeod of Carthage.
Memorials may be made to Eureka Presbyterian Church, 2155 Farm Life School Road, Carthage, NC 28327.
Fry and Prickett Funeral Home is serving the McLeod family.
Online condolences may be made at: www.PinesFunerals.com