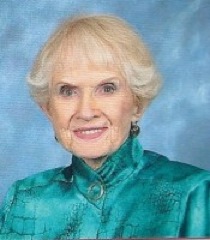 Mrs. Catherine (Kit) Gandy Hogg Aldridge, 94, died Monday December 26, 2011 at her home.
A Mass of Christian Burial will be held at 11:00 a.m. on Saturday December 31st at Sacred Heart Catholic Church with the Rev. Edward Burch as Celebrant.
The family will be receiving friends during a reception following the service at the church.
Born August 21, 1917 in Brooklyn, NY she was a daughter of the late Harry and Louise Barber Hogg and wife of the late James H. Aldridge.
Mrs. Aldridge studied at the Sorbonne in Paris and received her Bachelor's degree from Trinity College in Washington, D.C.
She did graduate study in Theater at the University of North Carolina at Greensboro. She was an actress with the Circle Theater in Hollywood for many years.
She was the CEO of Weight Watchers Franchises in North and South Carolina until her retirement in 1991.
Kit worked with the Red Cross during WWII in Maui and was a member of Sacred Heart Catholic Church.
She is survived by her daughter, Hannah Ingland of Pinehurst, five grandchildren and five great grandchildren.
Powell Funeral Home & Crematory in Southern Pines is in charge of the arrangements.
Memorials may be made to Sacred Heart Catholic Church,
300 Dundee Road, Pinehurst, NC 28374
Online condolences at: www.PinesFunerals.com