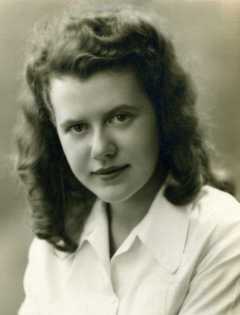 Catherine Ruth Harrington McNulty, age 90, passed away Friday (March 3, 2017) at Peak Resource Pinelake in Carthage.   A service will be held 2:00 PM Wednesday at Pinelawn Memorial Park Mausoleum with the Rev. Gregg Newton officiating. The family will receive friends at Fry & Prickett Funeral Home on Tuesday evening from 6:00 - 7:30 and other times at the home.   She was born on October 30, 1926 in Norwich, NY to the late Lewis and Ruth Clark Harrington. Catherine was valedictorian of the Norwich, NY high school class of 1944. She then enrolled for four years at Barnard College, associated with Columbia University in New York City graduating in 1948.   In her senior yearbook at Barnard, Catherine was accurately described as follows: “Sweet Faced, imperturbable Cathy is wonderfully relaxing to be with. Quiet, sunny-natured, nothing ever fazes her: yet with all this, she possesses a remarkable amount of stamina and determination. Knows and loves music and is fond of race horses (her mother keeps a stable). Is taking zoology courses with her outlook toward either research or perhaps medical school.”   A tradition at Barnard College is the elaborate event  known as Greek Games. In 1946 Catherine was one of four horses pulling a chariot. Upon graduation Catherine was employed at the Cornell Medical Center in New York City. Her supervisor was Dr. George N. Papanicolaou, MD, PHD, discoverer of a smear test for uterine cancer that became known as the “Pap” smear test.   After a time Catherine returned to Norwich to aid her mother in operating  the family florist and greenhouse business, Harrington’s Greenhouses, where she worked part time. She was an excellent floral designer and manager in that role. Her full time job was at the executive offices of Norwich Eaton Pharmaceuticals on Eaton Avenue.   After Catherine married Robert McNulty she became business manager for Bob’s very successful harness racing business. Over the years Bob won 1272 races which earned nearly two million dollars in purse money. He raced throughout the northeast but mostly at Vernon Downs in Central New York State.   Retirement years were spent in North Carolina where Catherine assisted Bob in operating a supply business for horse equipment.   Catherine had a major role in caring for her grandchildren and great-grandchildren over a period of many years.   For seventy nine years she was a member of First Baptist Church of Norwich, NY.   She is preceded in death by her husband Robert McNulty and brother George Harrington.   She is survived by one daughter Roberta LaClair, two grandsons Adam LaClair (Kristy), Jason LaClair; five great grandchildren Brandon LaCLair, Lauren LaClair, Jasmine LaClair, Kristen LaClair and JR (Jason Robert) LaClair; one brother Gilbert Harrington (Barbara).   Fry & Prickett Funeral Home is assisting the McNulty family.   Condolences: PinesFunerals.com