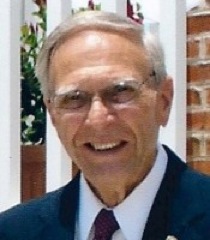 Charles H. Shields, died unexpectedly at his home Wednesday morning October 17, 2012.
Funeral services will be held on Saturday, October 20, 2012 at 11:00 a.m. at Page Memorial United United Methodist Church with Rev. Jane Leechford officiating. Burial will follow at Bethesda Cemetery.
He was born in Highfalls, NC on January 10, 1925 to Swannie Reynolds and Arthur Dewitt Shields.
Charles and his wife Criss enjoyed sixty-four years of marriage residing in Aberdeen. Together, they have been active members of Page Memorial United Methodist Church where he was a head usher and active member of the Methodist Men. Charles was also a member of Roman Eagle Lodge 550 and a retired Aberdeen Volunteer Fireman.
Charles and Criss came to Aberdeen as newlyweds in 1948 and he worked at Robbins Mills for ten years before owning and operating Shields Esso/Exxon Servicenter for thirty years. After retiring from the station, he joined the staff of Powell Funeral Home where he worked part-time for twenty years.
For many years Charles played the piano with a combo called The Viscos. Sharing his talent and love for music with others gave him much pleasure.
In addition to his wife, Criss, Charles is survived by a son, Chuck Shields (Kathy) of Aheboro; a daughter, Melinda Parker (Bill) of Southern Pines; two grandsons, Adam Shields of Asheboro and Eric Shields (Teresa) of Zebulon; two granddaughters, Paige Siwy (Nick) and Brooke Liebl (Kyle) of Raleigh; and one great grandson, Parker Siwy.
He was predeceased by a grandson, Will Parker.
The family will be receiving friends from 6 to 8 p.m. Friday at Powell Funeral Home in Southern Pines.
Memorials may be made to Page Memorial United Methodist Church, P. O. Box 695, Aberdeen, NC 28315