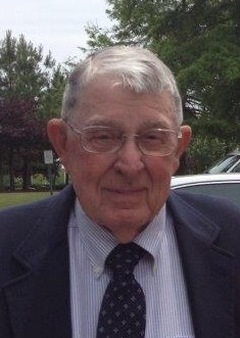 Southern Pine, NC Charles Rex Miller, 91, of Southern Pines, NC passed away on Saturday, September 11, 2016 at FirstHealth of the Carolinas in Pinehurst, NC A memorial service will be held at Emmanuel Episcopal Church in Southern Pines on Saturday, September 17 at 2:00 PM officiated by the Rev. John Talk. He was born December 27, 1924 to Philemon Jacob and Zadah Angell Miller in Walled Lake, Michigan. He served in WWII as a machinist’s mate, petty officer 2 nd class Seabee, stationed on the Solomon Islands in the South Pacific. He married Priscilla Bertra Colvin on February 14, 1951 and they were married for 53 years. He was a contractor and owned and operated Christmas tree farms in Michigan. He retired in 1978 and moved to the James Creek neighborhood in Southern Pines, NC where he spent much of his time playing golf at Southern Pines Country Club. He is predeceased by his wife Priscilla, and his sister Phyllis Thompson. He is survived by his son Charles Robert Miller and daughter-in-law Diana of Wilson, NC, his grandsons Charles Rex Miller (wife Ashleigh and children Zadah and Nicolas) of Abbeville, SC and Robert Wilton Miller of Brimley, Mi. Powell Funeral Home and Crematory of Southern Pines is assisting the family. Online condolences at: PinesFunerals.com