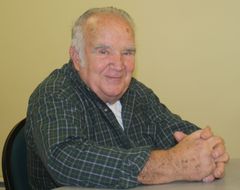 Clarence Ray Morgan, 72 peacefully left his Earthly home for his Heavenly home on Friday, March 7, 2014. Funeral service will be held at 2:00 PM Monday, March 10, 2014 at Unity Grove Baptist Church, where he attended, with the Reverend Terry Warren, Pastor Jimmy Shirlen and Pastor Tom Powers officiating. Burial will follow in the church cemetery. Clarence had a love for the outdoors, bluegrass music-attending Maness Music Barn every Tuesday night and NASCAR racing. He worked for Stanley Furniture for 39 years until the plant closed. Clarence was a son of the late Azra and Annie Williamson Morgan.  He was preceded in death by daughter: Janet Denise; brothers: Floyd, Lester, Joseph; sisters: Louise Morgan and Gladys Brown. Clarence is survived by his wife of  48 years, Barbara; sons: Chris and wife Stacey, of Carthage, Bradley, of the home.  Known as “Papaw” to his three grandchildren: McKinley, Kolby and Keiton Morgan, they were his pride and joy!  He is also survived by brothers: James and wife Jeanette; Leonard and wife Pauline, Kenneth and wife Kay, and Roy, all of Carthage; sisters: Pauline Priest, of Carthage; Dorothy Williams and husband Wilburn, of Eagle Springs, Delores Lassiter and husband Arnold, Beulah Ritter and husband Richard, Betty Doris Garner, all of Robbins and many nieces and nephews.   The family will receive friends from 7-9 PM on Sunday, March 9, 2014 at  Kennedy Funeral Home and at other times at the home of Chris and Stacey Morgan, 818 Mt Carmel Road, Carthage, NC. Memorial may be made to Unity Grove Baptist Church, 849 Mt Carmel Road, Carthage, NC 28327. Kennedy Funeral Home is assisting the Morgan Family Condolences may be made to pinesfunerals.com