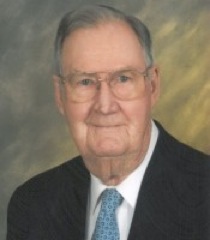 CARTHAGE
Clinton P. Campbell, age 88, died Monday, March 5, 2012 at First Health Moore Regional Hospital in Pinehurst.
A funeral service will be 2:00 PM Thursday at First Presbyterian Church in Carthage conducted by the Rev. Rick Martindale. Burial will follow with military honors in the church cemetery.
He was born March 27, 1923 in Jackson Springs to Daniel McMillan (Mack) and Annie Williams Campbell. Later the family moved to Eagle Springs where they made their home. He attended elementary school in Robbins and Eagle Springs and graduated with the class of 1940 from West End High School. In 1941 he went to work in the shipyard in Newport News, Virginia.
He married Anna Belle Blue on April 4, 1942. They lived in Newport News, Va. until 1944 at which time he joined the Navy. He served on a PT boat and later on a Net Tender (AN 85). When he was discharged from the Navy, they moved to Carthage where their two children were born.
In 1946, he went to work with Carthage Truck and Implement Company, a farm equipment dealer in Carthage. He worked as sales manager until 1956 at which time he opened and operated Moore County Poultry Co. in Carthage. In 1964 he sold the Poultry Company and along with Mr. Charles Underwood and Mr. William Maness purchased Carthage Tractor & Implement Company from Mr. Haynes Britt. When Mr. Underwood and Mr. Maness retired he purchased their interest in the business and continued to operate the business with his son, Michael. In 1984 he liquidated the equipment business and in 1985 sold the Hardware Store to Keith Hardware. At this time Mr. Campbell retired.
He was quite active in the church and the community. He was a member of the First Presbyterian Church and served as a Deacon and an Elder. He served as Sunday School Superintendent and on many committees, heading several. Serving on the cemetery committee, he was instrumental in many improvements to the church cemetery.
He served four years on the first Moore County Planning Board from 1965-1969. He also served on the Carthage School Board and was on the first Union Pines High School advisory board for several years.
He was active in the Carthage Jaycees, serving as President and was honored with the first Man of the Year award. Later he was recognized as the Boss of the Year. He was a member of the Carthage Chamber of Commerce, serving as first vice president. He also was a director on the first Industrial Group in Carthage. He served on the Management Committee of the local Carolina Bank for 17 years. He served on the Carthage Town Board for six years and the Moore County Farm Bureau, one year as President.
He is survived by his wife of nearly 70 years, Anna Belle Blue Campbell; a son, Michael Clinton Campbell of Carthage; a daughter, Sue Catherine (Cathy) Campbell of Chapel Hill; grandson, Gary Michael Campbell of Carthage; granddaughter, Katie Campbell Sims & husband, Trey of Carthage; sister, Jean C. Williams of California and great-granddaughter, Brynlee Paige Sims.
The family will receive friends Wednesday from 6:00 - 8:00 pm at Fry and Prickett Funeral Home and other times at the home.
Memorials may be made to First Presbyterian Church of Carthage Building Fund, PO Box 397, Carthage, NC 28327.