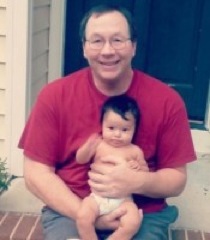 David Alan Donaldson, 53, passed away Sunday evening, September 8, 2013 at FirstHealth Moore Regional Hospital, Pinehurst, NC.
David was born on February 16, 1960 in Columbia, South Carolina, the firstborn child of Rebecca Ann Donaldson and Paul Donaldson. He owned his own computer business, Big Nerd Computer Repair, and was excitedly beginning a career with Sedgewick Homes. His world revolved around his only child, a daughter Chloe' Donaldson, and his first and only grandchild, Ivy Elizabeth Peralta. His new granddaughter, 5 months, was the apple of his eye and brought him a great, wonderful, and irreplaceable happiness. He was a tender and kind man, a giant teddy bear who coached youth soccer for many seasons and enjoyed cycling in his younger years. He was a giving soul, and spent much of his later time working to help senior citizens learn to better use technology. He was preceded in death by his father, Paul Donaldson.
David is survived by his wife, Karen Donaldson, daughter: Chloe' Donaldson and fiance Jose Peralta, granddaughter: Ivy Peralta, mother: Rebecca Mitchell Donaldson, sisters: Tracy Williams and husband Bryan, Cristy Solomon and husband Andy, and nephews Micah, Asher, and Chason. David's extended family includes aunts Shirley Ann Maddox, Susan Baumgardner, Robin Whitehead, and Holly Mitchell. Uncles Jay Mitchell and Ed Whitehead, and cousins Cliff and Quint Maddox and families.
Memorial Service will be held at 11:00 AM, Saturday September 14, 2013 at Kennedy Funeral Home, Robbins, NC.
In lieu of flowers contributions may be made to the David Donaldson Memorial Fund, please contact Kennedy Funeral Home.
Thank you to all who have sent their wishes and prayers: they are a source of comfort to those who knew and miss him. David, of course, would've been embarrassed by the fuss.
Kennedy Funeral Home is assisting the Donaldson family.
Online condolences may be made at www.pinesfunerals.com