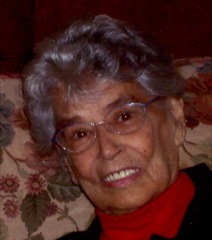 Cameron, NC
Della B. Wallace, 82, of Cameron died Sunday (January 13, 2008) at Pinelake Health and Rehabilitation Center in Carthage.
She was born October 29, 1925 in Cairo, IL to the late G.E. and Blanche Dew Sheldon. She was preceded in death by brothers Dallas, Gary and Charles Sheldon.
A beloved wife and mother, she is survived by her husband of 49 years, Roy M. Wallace of Cameron; sons Leonard Wooten of Cameron, Steve Bias of Nitro, WV; daughters Pat Greene and husband Sandy of Pineola, Tammi Blake and husband Dale of Raeford, Tina Lewis and husband David of Sanford. She was a grandmother of eight and a great grandmother of five.
Visitation will be held from 6:00 - 8:00 PM Tuesday at Fry and Prickett Funeral Home in Carthage. A private memorial service will be held at a later date on the Kanawha River in Charleston, WV.
In lieu of flowers memorials may be made to your local chapter of the Salvation Army.