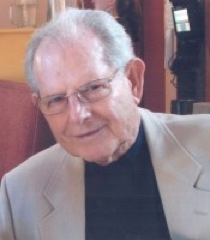 Donald A. (Don)Smith, 86, passed away Monday, November 14, 2011 at his home in Foxfire Village.
Funeral services will be held at 11:00 a.m. in the Mausoleum Chapel at Pinelawn Memorial Park in Southern Pines on Saturday, November 19th.
Born September 5, 1925 in Hazel Park, MI he was a son of the late John and Jessie Woolner Smith, husband of the late Edna Dawson Smith, and was preceded in death by two brothers, Archie and Harold Smith, a sister-in-law, Henrietta Brown, two brothers-in-law, William Brown and Roger LaCasse
Mr. Smith was a U S Army Veteran of WWII and the owner of Don's Beef Buffet Restaurant in Tecumseh, MI.
He is survived by a sister, Edna Mae Plumber, sister-in-law, Florence LaCasse, along with twelve nieces and nephews and will be greatly missed by all.
The family will be receiving friends from 5 to 7 p.m. Friday at Powell Funeral Home in Southern Pines.
Memorials may be made to FirstHealth Hospice Foundation, 150 Applecross Road, Pinehurst, NC 28374.