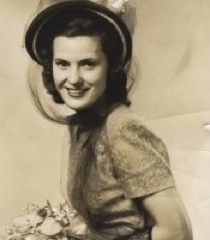 SANFORD
SANFORD - Dorothy 'Dot' Balmer McNeill, 82, died Thursday, February 17, 2011, at Central Carolina Hospital in Sanford, after struggling with Alzheimer's Disease for several years.
A funeral service is planned for 11:00 AM on Monday, February 21, 2011, at the First Presbyterian Church of Sanford with the Rev. Stuart Wilson officiating. The family will receive friends one hour prior to the service. Burial at Buffalo Church Cemetery will follow the service.
A native of North Hampton County NC, Dot was the daughter of the late Littleton J. and Eunice Bell Balmer. Dot graduated from Seabord High School in 1946 and continued her education in Raleigh at Hardbarger Junior College of Business. Dot met Jack McNeill of Sanford at Hardbarger and following their marriage in 1949, came to Sanford to live and raise a family. In addition to being a mother and homemaker, Dot had many careers during her lifetime. She was a bookkeeper for Lee County Schools, a secretary at Sanford Central High School, an administrative secretary in Carolina Bank's Trust department and later, following retirement, a successful real estate agent. Dot was also very involved in her community and church. Many new residents will remember her as the Welcome Wagon lady who first welcomed them to Sanford. Other's will remember the Meals on Wheels that she and Jack delivered for many years. A past-president of the Sanford Business and Professional Women's Organization, Dot also served on the Lee County Senior Services Board. A member of Sanford's First Presbyterian Church for over 60 years, she became a Stephen's Minister in 2007.
Dot was preceded in death by her husband, Jack McNeill; a brother, John Johnson; sisters, Edna Ricks and Liza Balmer and a grandson, Andrew Kelly Wicker. She is survived by her daughter, Karen Wicker and her husband, Robert Wicker of Carthage; a son, Dwight McNeill and his partner, Brian Noyes of Arlington, VA; a sister, Molly Bland of Enfield, NC; and a granddaughter, Kelsy Lauren Wicker of Carthage. Memorials may be made to First Presbyterian Church of Sanford, 203 Hawkins Avenue, Sanford, NC 27330 or the American Cancer Society, 11 South Boylan Street, Raleigh, NC 27603. Online condolences may be made at www.PinesFunerals.com