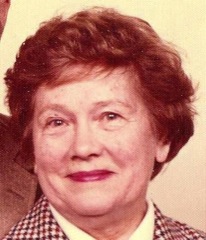 Mrs. Dorothy E. Curley died Monday April 12th at FirstHealth Moore Regional Hospital in Pinehurst.
Dorothy was the daughter of the late Joseph and Teressa Hajduk Woinick. She was born in Springfield, Vermont and was a graduate of Springfield public schools. She also attended St Joseph Academy, Trinity College and was a graduate of Boston University.
Mrs. Curley was a firm believer in education and the American public school system. She taught history and civics in the public schools of Richford, Vermont, Swanton, Vermont, Fairfield, Connecticut, and Chatham, New York where she was head of the Social Studies Department. She was a member of St. Anthony of Padua Catholic Church, was a volunteer at St. Joseph of the Pines, and was a member of Knollwood Heights Women