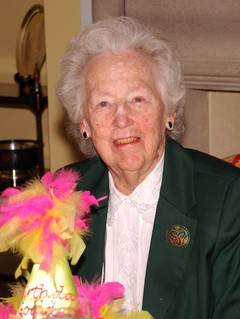 Dorothy Worth Burtis, age 98 of Southern Pines died Tuesday (June 21, 2016) at St. Joseph of the Pines.   A memorial service will be 11:00 am Monday (June 27, 2016) at Belle Meade Chapel. Inurnment will be at Pinelawn Memorial Park Mausoleum.   A native of New York, NY she was a daughter of the late William Henry Ogsbury and Mary Lambeth Randolph Osgbury. She was a graduate of St. Catherines School in Richmond and Randolph Macons Womans College in Lynchburg, Virginia. In 1941 she married Thomas Clarson Worth, Jr. In 1946 they moved to Greensboro and in 1957 she and her family settled in Southern Pines.   Dot was an avid golfer and bridge player. She started Par Seekers Ladies Golf group at Southern Pines Country Club and won many championships there as well as other golf tournaments and trophies. She was a long-time, active member of Brownson Memorial Presbyterian Church.   In 1991 she married Edward Robert Burtis and in 2003 the two of them moved to Belle Meade.   She is survived by her daughter Peggy St.George and husband Bill of Charlotte; son Tommy Worth and wife Diana of Greensboro; sisters Phyllis Shannahan and Gladys Koon; three grandchildren Myers St.George, Worth St.George and Shannon St.George Pickerel; two great-grandchildren Connor and McKenzie Pickerel. One sister, Jeanette Webb, preceded her in death. She is also survived by the family of her late husband, Bob Burtis.   Powell Funeral Home and Crematory is assisting the Burtis family. The family requests that memorials be made to Brownson Memorial Presbyterian Church.   Condolences: PinesFunerals.com