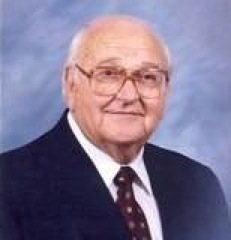 Dr. William C. Walton, age 77, died Tuesday, January 15, 2008 at FirstHealth Moore Regional Hospital in Pinehurst.
A long-time educator and civic leader, Walton was serving as mayor of Carthage at the time of his death. Dr. Walton came to Moore County in the 1964 to serve as the first principal of Union Pines High School. In 1970 he became assistant superintendent for curriculum and instruction in Moore County Schools. Under his Leadership, the first ever, sequential K-12 curriculum was developed and implemented in the system. A Baptist Lay Leader, Dr. Walton had taught the Thad Frye adult men's Sunday School class for more than forty years. He served as a deacon board chairman and church leader. He had served multiple terms as a trustee of the North Carolina Baptist Children's Homes. He taught Sunday School last Sunday.
Dr. Walton received his B.S. degree from Catawba College, his Master's Degree from UNC-Greensboro and his Sixth Year and doctoral degree from the University of North Carolina at Chapel Hill.
Dr. Walton was born in Rowan County to the late Henry and Decima Walton. He was their only surviving child. He married Miss Iola Wyatt in August 1951.
He is survived by; his wife of 56 years Iola Wyatt Walton, his daughter Rebecca and husband Thomas Prim of Carthage; his sons Curt Walton and wife Clare, Brent Walton and his wife Brenda all of Charlotte. His five grandchildren are Blake Prim, Corban Prim, Hannah Walton, Yale Cason, and Joshua Walton.
The family will greet friends Wednesday from 7:00-9:00 PM at Fry and Prickett Funeral Home, in Carthage.
Funeral services will be 2:00 PM Thursday, January 17th at the First Baptist Church in Carthage where he was a member. Entombment will follow in Pinelawn Memorial Park mausoleum, in Southern Pines.
Memorials may be made to: First Baptist Church, memorial fund, P.O. Box 824, Carthage, NC 28327 or the Baptist Children's Homes of NC, P.O. Box 338, Thomasville, NC 27360.