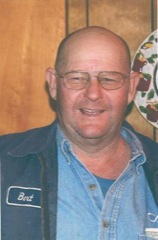 CARTHAGE
Elbert Lyndsay Sullivan, age 63, went home to be with the Lord on Monday, May 10, 2010. Elbert was born to Jesse Edgar Sullivan and Maude Luck Sullivan on March 23, 1947. A lover of GOD and country, he joined the Navy and served two tours in Vietnam as a Navy SeaBee. We Build, We Fight, Can Do is a phrase he was always proud of.
Elbert enjoyed many jobs over the years. He was a pipe-fitter, he owned Bert's Brass and Bert's Crane and he worked with Calco metal works. The entrepreneur that he was, he never shied away from trying new things. This is a property that he instilled in his children and constantly encouraged them that they could do anything they set their minds to.
Elbert met his wife, Ruth on a blind date and proclaimed that day he would marry her. The constant in their 45 years of marriage was that they truly loved each other.
He was a loving husband, daddy, brother, friend and papa. Everyone that knew him knew that he loved them and he truly cared about them personally.
Above all these things, Elbert was a Christian man. A life long member of Bethlehem Baptist Church he served as a deacon and adult Sunday School Teacher. Even in the end of his life on earth he was studying to show himself approved to GOD and praying for his friends and family.
In addition to his parents, he was preceded in death by a brother, John Sullivan. Elbert is survived by his wife of 45 years, Ruth Shephard Sullivan; his daughters, Frances Callicutt and husband James, Helen Games and husband John, and Kellie L Sullivan; grandchildren, Jordan, Rachel, Sara, Ariana, Whitney and Jesse; his siblings, Cicero Sullivan, Don Sullivan, Mary Sullivan, Martha Soehren, Alma Baker and Naomi Wray; and his life long friend and brother, Charles Lewis.
The family wishes to thank everyone for their prayers and support. Everything was
appreciated.
Funeral services will be held on Wednesday, May 12th, at 2:00 PM at Bethlehem Baptist Church with Pastor, James Cagle, Pastor Bill Monroe , Pastor Charles Goins and Pastor John Stinnett officiating. Burial will follow in the church cemetery.
The family will receive friends on Tuesday from 6:00-8:00 PM at Fry and Prickett Funeral Home and after the funeral service in the fellowship hall.
Online condolences may be made at www.fryandprickett.com