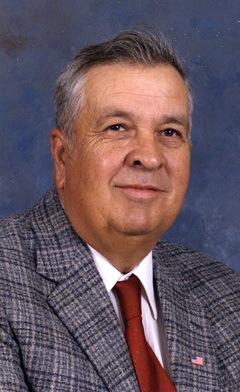 Elex O'Briant Collins of Rockingham died Sunday, May 15, 2016 at FirstHealth Moore Regional Hospital in Pinehurst. Funeral services will be 2:00 PM Wednesday, May 18, 2016 at Pine Grove Baptist Church conducted by the Rev. Bill Reynolds. Burial will follow in the church cemetery. The family will receive friends at the church one hour prior to the service. A native of Lee County he was a son of the late Elbert and Maggie Fore Collins. He was proud of his military service having served in both the Coast Guard and the Marine Corps during WWII. He retired from RH Bouligny Inc where he did contract work living in many different parts of the country. After retirement he bought a truck and did truck driving for another 20 years. He was preceded in death by: brothers, George Collins, Gilbert Collins and  sister Jessie White. He is survived by his wife of 64 years Hazel Williams Collins; brothers Jerry Collins and wife Annie of Broadway, Wayne Collins of Charlotte. Memorials may be made to: Pine Grove Baptist Church, 2459 PineGrove Road, Eagle Springs, NC 27242. Kennedy Funeral Home in Robbins is serving the Collins family.