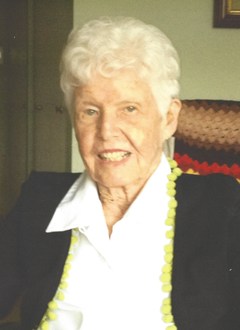 Elizabeth Wilcox Blue, 96, went to be with her Heavenly Father on October 27, 2017.  She was born Oct. 12, 1921, in Knoxville, TN, to Thomas Henry and Louise Wilcox.  When she was two years old the family moved to Richmond, VA, where Betty lived continuously until 2014.  She then moved to Southern Pines, NC, to be near her daughter.

Betty, as she was known to everyone, was a 1938 graduate of Thomas Jefferson High School in Richmond and attended Pan American Business School.  She retired from the United Methodist Homes(The Hermitage).  She was a member of Ginter Park United Methodist Church and active in the United Methodist Women. She also was a 65-year member of the Hanover Chapter #130 Order of the Eastern Star.  { While in North Carolina, she enjoyed the Mission Action Group, Knit Purl and Pray, and volunteering with the Holy Folders at First Baptist Church, Southern Pines.}

Betty is predeceased by her parents; her sister, Mary Louise Dull; son, Ivy “Chip” Blue, and devoted companion, Harry Harding.  She is survived by her son, Tom Blue(Judy) of Richmond; daughter, Bonnie Elhart(Vernon) of Pinehurst; daughter-in-law, Connie Blue of Mechanicsville;  7 grandsons and their spouses; 11 great-grandchildren; and beloved nieces, Barbara Clemens and Suzanne Fullerton and their families.

Her smile, laughter, creative humor, singing and playing the harmonica will be greatly missed.  The family gives praise and thanksgiving to the Staff of Golden Oaks SJPHC for their affectionate care and support {as well as to friends and staff at First Baptist Church, Magnolia Gardens and First Health Hospice.}

Powell Funeral Home and Crematory of Southern Pines, NC is handling the arrangements.