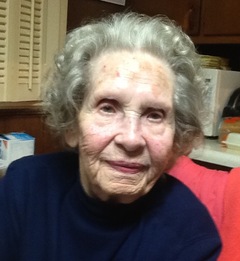 Eva R. Dowd, 'Pinky' age 94, passed away on October 30, at home, surrounded by her loving family.

She was preceded in death by her parents, John and Mattie Brown Richardson, her husband, Robert P. Dowd, her grandson, Ben Bryant Dowd and her sister Ethel R. Trotter.

Robert and Pinky began Poverty Hill Nursery in 1965. Pinky was a registered nurse for 45 years. She began her nursing career at McCain caring for tuberculosis patients. After this she worked at Moore County Hospital, now First Health, caring for many patients on Jackson Hall and educating many young nurses, finally ending her nursing career as  Dr. Francis Owens' nurse until their retirement.

The funeral will be 2:00 pm Wednesday, November 2, at Manly Presbyterian Church with a visitation beginning at 1:00 in the fellowship hall. The burial will be at Pinelawn Cemetery on Morganton Road in Southern Pines, NC.