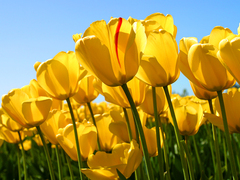 She was born May 12, 1940 in St. Louis, Missouri, but she always said her life started May 14, 1959, when she married Theodore Wozniak.  Florence excelled academically and had a life long love of reading.  Her first job while in high school was at the public library.  She enjoyed books about medieval life, the American West and mysteries.  Florence was a quilter, basket maker (Turtle Creek Baskets) and taught 4-H's how to make a solar cooker from a pizza box.  She gardened organically and grew heirloom tomatoes many years before the trend.

Due to Florence husband's career in the United States Air Force, she lived in Germany, Holland and Long Island, New York before moving to Carthage.  Florence volunteered at the Literacy Council and the Moore County Agriculture Center.  She was past president of the Sandhill's Singles Club.  Florence was also a member of the Eureka ECA Club.  She was instrumental in producing, "700 Years Of Cooking Experience", a club fundraiser cookbook. She also organized the collection of manufacturers coupons to be sent to military instillations, collecting 400,000 coupons.  Florence also held positions as secretary, vice president and president, receiving Club Woman of the Year in 2004 and 2014.

Florence's husband preceded her in 1978.  She is survived by her daughter, Cindy (William) and their daughter, Caitlin; also by her son, John and his children, Regina and Kyle and two great grandchildren.  She also leaves her sister, Sandra Fithian; her brother, Robert predeceased her.

In lieu of flowers, donations in her name can be made to Hospice and Palliative Care in Pinehurst or a charity of your choice.

As per her wishes, Florence will be cremated and her ashes buried with her husband.  A memorial service will be held in New York.