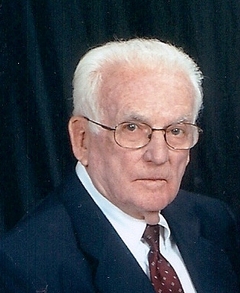 Funerals service will be held at 2:00 PM on Saturday January 31, 2015 at Smyrna United Methodist Church where he has been an active member for many years, with the Reverend Tal Madison officiating.  Burial will follow in the church cemetery.

Mr Williams was the son of the late Grady F. and Gertie Sheffield Williams.  He was predeceased by his brothers Elbert Williams, Ernest (Bill) Williams, Graham Williams, Ray Williams and Clinton Cox, and one sister Edith Moore.

He is a veteran having served his country during World War II, in the Asiatic Pacific Theater with the occupation forces of Japan.  He received a World War II Victory and Good Conduct Medal.  He was retired from Milliken Inc. where he  worked for 44 years.

The family will receive friends at Smyrna United Methodist Church beginning at 12:00 noon on Saturday January 31, 2015 and other times at the home.

Memorials may be made to FirstHealth Hospice Foundation 150 Applecross Rd. Pinehurst, NC 28374

Online condolences may be made to www.pinesfunerals.com