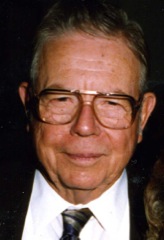 Gilbert McLeod "Gib" Bailey, age 91 of Carthage died Thursday.
Funeral services will be held 2:00 PM Sunday at Union Presbyterian Church with the Rev. William A. Stewart, Jr. officiating. Burial will follow in the church cemetery.
A native of Moore County he was a son of the late Martin McQueen Bailey and Ina Fields Bailey. He was a US Army veteran and a member of American Legion post #12 for 60 years. He was a retired Post Master where he worked in the Carthage Post Office for 42 years. In addition to his parents he was preceded in death by: his wife Ilene Blalock Bailey and his son Gilbert McLeod "Mac" Bailey, Jr.
Gib lived a very active life and was known by many throughout the County and elsewhere as "The Glad Man" for all the gladiolas he grew and gave away. He also enjoyed farming and grew pumpkins and gourds in the fall for those who wanted them. He was a tree farmer too, and had received the Tree Farmer of the Year award as well as other awards including: the Lifetime Membership Award from Union Presbyterian Church and the Citizen of the Year award from the Rotary Club of Carthage.
He is survived by: a daughter Rebecca Bailey of Carthage; son David Bailey and wife Barbara of Sanford; daughter-in-law Jean Bailey of Clayton; sister Edith Marsh; brother Charles Bailey; grandchildren Stephen and Matthew Bailey.
The family will receive friends on Saturday from 6:00-8:00 PM at Fry and Prickett Funeral Home and other times at the residence.
Memorials may be made to: Union Presbyterian Church, P.O. Box 898, Carthage, NC 28327.
Condolences: www.FryandPrickett.com