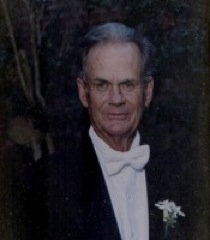 Robbins:
Glenn B. Lassiter, Sr. 76 died Wednesday January 4, 2012.
Funeral service will be held at 2:00 PM on Friday, January 6,2012 at Tabernacle United Methodist Church with the Rev. Mike Weber officiating. Burial will follow in the church cemetery.

Family will receive friends from 6-8 PM on Thursday January 5, 2012 at Kennedy Funeral Home and other times at the home.
He was the son of the late Will and Desma Ballard Lassiter and his brother Robert Lassiter preceeded him in death.
Mr. Lassiter was a retired owner/partner for Piggly Wiggly grocery stores and Western Auto of Robbins, and a retiree from the golf division of Pinehurst Resort and Country Club. He was an avid golfer scoring 8 lifetime hole-in-ones, winner of several CGA and CPGA events including a CGA Father- Son Championship.
He was a member of the Tabernacle UMC, served as a board chair, head usher, and a member of the United Methodist Men. He was a veteran of the US Army Reserves.
He is survived by his wife Jimmie Ann Lassiter of the home, sons Glenn Lassiter, Jr. and wife Melissa of Chapel Hill; Stephen Lassiter and wife Kathy of Pinehurst, and Chris Lassiter and wife Lorna of Carthage. A sister; Dixie Lewis of Robbins and brothers Carlton and Harold Lassiter of Lillington. Grandchildren are Glenn III and Rachel Lassiter, Jay and Will Lassiter Teresa Donner and step grandchildren.
Memorials may be made to Tabernacle United Methodist Church, P.O. Box 395 Robbins, NC 27325; FirstHealth Hospice Foundation 150 Applecross Rd. Pinehurst, NC 28374 or Carolinas Golf Association P.O. Box 319 West End, NC 27376.
Condolences may be made to www.PinesFunerals.com
Kennedy Funeral Home is assisting the Lassiter family.
.