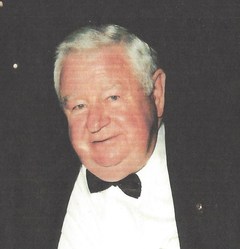 Harvey Russell Nickerson, 87, passed away May 17, 2016 at St Joseph of the Pines in Southern Pines NC.

A service will be held June 1, 2016 at 2pm at the Belle Meade Chapel officiated by the Rev Archie Stevens.

He was born August 16, 1928 at home in Falmouth MA, to the late William Russell and Augusta Amelia Dvorak Nickerson.

In 1946, he graduated from Milton High School in Milton MA, where he was living with his mother and sister after the divorce of his parents. He received a Bachelor of Science degree in Mechanical Engineering from the Massachusetts Institute of Technology in 1950.

After college, he went to work as an engineer for Resistoflex Corporation in Belleville NJ. He worked for them for thirty seven years, retiring in 1987 as a Research Manager with five patents. His only interruption was for two years in the Army, 1952-1954, in Albuquerque NM, where he attained the rank of First Lieutenant. He lived in Roseland NJ for 33 years before retiring in 1987 and moving to Whispering Pines NC, and later to Belle Meade Retirement Resort. He married Elizabeth Durland Dupot in 2004.

He had served on several Town Boards in Roseland NJ and was involved in the Boy Scouts as Scout and later as Scoutmaster. He was also involved in Rotary, serving on the district level. In retirement, he remained actively involved in the Rotary and did some volunteer work.

He was predeceased by his first wife , Nadine, and sister, Thelma Elliott of Plymouth MA.

He is survived by his wife, Elizabeth Dupont Nickerson of Southern Pines NC, daughters Leslie Abbate (Dennis) of Hilton Head SC and Dianne Cole (Jeff) of Bethlehem PA, four grandchildren, two great-grandchildren, and a number of nieces and nephews.

Powell Funeral Home and Crematory of Southern Pines, NC is assisting the family