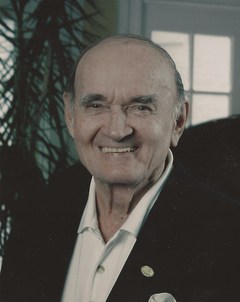 Southern Pines NC Howard Wyman Reynolds, 91, of Southern Pines NC, passed away at his home on December 2, 2016. He was born June 14, 1925 to Cedric and Doris Reynolds in Sydney ME. He graduated from Winthrop High School in 1943, Harvard Radio School in 1943, and the University of Maine-Orono campus in 1950. Between high school and college, he served three years in the US Navy, from 1943-1946. A WWII veteran, he was a Radioman Second Class, stationed on the Admiralty Islands (Manus) main relay station for the South Pacific. After college, Mr. Reynolds worked for Columbian National Life Insurance Company in Chicago IL, from 1950 to 1953 as a regional group manager. He then worked for Lincoln National Life, Freeman Wood Insurance Agency, and Mutual Insurance. After attending the New York Institute of Finance in 1960-1961, he spent 32 years in stock brokerage with Paine Webber Jackson & Curtis in Boston MA. From 1965-1975, he also had a daily radio broadcast on WHDH AM in Boston, “Business & Financial News”. After moving to Southern Pines, he began working at Pinehurst Resort & Country Club in 1993 until he retired in 2011. While serving many years as the Maitre D’ of the Carolina Dining Room, he was also known for offering financial and investment guidance to his younger coworkers. Mr. Reynolds is survived by his cousin, David Ward, of Southern Pines NC. Powell Funeral Home and Crematory of Southern Pines is assisting with arrangements. Online condolences can be offered at PinesFunerals.com.