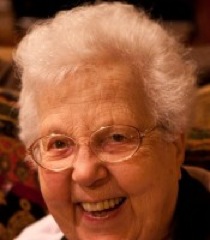 Irene A. Thomas, 92, of Austin, Texas, one of the Greatest Generation, peacefully left this life and was welcomed to Heaven on September 10, 2010 where she joined her late husband, Douglas Thomas, her parents, and many family and friends.
Irene's life will be honored and celebrated by her family, including daughter Susan Morton of Austin, Texas, son in law Steve and loving grandson Sam; son Douglas Thomas of Potomac Maryland, daughter in law Shu Hui Chen Thomas and loving granddaughters Tina and Olivia; sisters Mildred Powers and Ann Brookes, her nieces, nephews and her many friends in Maryland and Texas.
Irene was born in West Hoboken, New Jersey on June 16, 1918. Graduating from High School in the Depression, Irene went to work in New York City as a clerk for various companies, helping support her family with her weekly pay. As a young woman Irene had a spirit of adventure and took cruises to South America and through the Panama Canal.
Irene provided leadership to the Girl Scouts, serving as Executive Director of the Cortland County Girl Scout Council in New York. She was also Camp Chairman of the North Hudson Girl Scouts and helped establish a summer camp there. She remained active as an adult leader and supporter for many years in New York and Maryland.
Irene married Douglas Thomas on December 15, 1956. They lived in New York, Maryland and, in retirement, North Carolina. While her children were in school, Irene worked at the Holton Arms School in Maryland, which her granddaughters later attended. After Doug passed away, Irene explored the world with her sisters, flying in tiny airplanes and hot air balloons; sleeping in tents in the African bush, visiting opal mines in Australia, traveling up the Amazon in a riverboat, visiting the Holy Land and exploring life to the fullest. She shared her love of travel with her children and grand children, taking them on a tour of Paris, Germany and Prague when she was in her 80's. Irene never met a stranger; she was a natural ambassador sharing her love of life with every person she met.
Irene remained active throughout her life. She began her career as a watercolor artist at the age of 75, and inspired many younger students to persevere with their craft. In her 80's she went into business creating computer reproductions of her art on greeting cards. Irene never lost her desire to learn new things and to meet new people.
The family wishes to express their appreciation for the extraordinary care provided by Dr. Eric Weidmann, Dr. Gerald Levy, Karen Wegmann, RN and by the other nurses and volunteers at Hospice Austin who ensured Irene was able to live life to the fullest. A graveside service will take place in Pinehurst, NC on Saturday September 18, 2010. A memorial service will he held at The Continental Apartment, 4604 S. Lamar, Austin, TX on Friday September 24, 2010 at 2:00 pm. In lieu of sending flowers, the family requests donations be made to Hospice Austin, 4107 Spicewood Springs Rd., Austin, TX'½ 78759 or to The Holton-Arms School, Advancement Office, 7303 River Road, Bethesda, MD 20817. Friends are welcome to post memories or pictures on the interactive obituary page at http://www.pinesfunerals.com/.