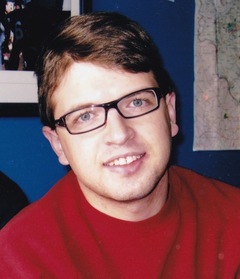 Isaac Robert Levy, 33, died shortly after noon on Thanksgiving Day, November 24, 2016, at his home in Southern Pines, NC, with his mother, father, brother, and caregiver, Victor Blue, at his bedside.   Isaac, who took the nickname Ike in middle school was born in New York, NY, on December 13, 1982, to Madge McKeithen and Noah R. Levy, two years before his brother and best friend, Nicholas Cameron Levy.   Ike grew up in West Windsor, NJ, and Atlanta, GA, graduated from the Galloway School in Atlanta, and was an active member of Covenant Presbyterian Church there. At age 14, he developed symptoms indicating a degenerative neurological disease, the progression of which caused his death 19 years later. Despite ardent efforts by his family and many skilled physicians, Ike’s illness remained undiagnosed at the time of his death.   Following high school, Ike lived in and fully participated in the lives of three vibrant communities: Maple Hill in Temple, NH, Camphill Soltane in Glenmoore, PA, and Annandale Village in Suwanee, GA. He also lived in two senior living facilities: Sunrise in Marlboro, NJ, and St. Joseph of the Pines in Southern Pines. Ike lived with his mother in Darien, Connecticut, in 2009 and in Southern Pines, NC, in 2016. In each of these places, he made friends and deeply appreciated opportunities to connect with others.   He especially enjoyed baseball games and travel with his family and with other young people on trips organized by Guided Tours. He is the first born in his generation in both his mother’s and father’s families and took particular pleasure in knowing his brother’s and cousins’ whereabouts, activities, and work even as his own mobility declined.   He is survived by his parents, Madge McKeithen, of Southern Pines, NC, and Noah R. Levy, of Whitehouse Station, NJ, his brother, Nicholas C. Levy, of Durham, NC, thirteen cousins, aunts and uncles, and step-family, Chris, Bobby, and Julie Renz, of New Jersey and New York.   Funeral services will be held at Cameron Presbyterian Church at 2 p.m. on Monday, November 28, with burial in Cameron Church Cemetery.  The family will receive friends following the service in the church fellowship hall.   In lieu of flowers, please send gifts in Isaac Levy’s memory to the Undiagnosed Diseases Fund at the National Organization for Rare Disorders (NORD) at either the following address or link: NORD, 1900 Crown Colony Drive, 4 th Floor, Quincy, MA 02169.   https://salsa3.salsalabs.com/o/51076/donate_page/research-program     Fry & Prickett Funeral Home is serving the Levy family.   Online condolences: PinesFunerals.com.