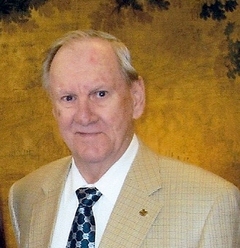 James “Boop” Powell Stewart, died Sunday, August 24, 2014 at his home surrounded by his family. Funeral service will be held at 11:00 AM Wednesday, August 27, 2014 at Tabernacle United Methodist Church, where he was a member, with the Reverend Mamie Alley officiating. Burial will follow in Pine Rest Cemetery. Boop enjoyed hunting, fishing, NASCAR and all sporting events. He worked for John L. Frye Company for 54 years, and served as a North Carolina Magistrate  for 20 years.  He served the community in the Robbins Volunteer Fire Department from 1957 until 1994, and was Chief from 1973 until his retirement in 1994. He was a Member of the Woodmen of the World and served a term as State Treasurer.  He was a loving husband, father, grandfather and great-grandfather.  Spending time with his family gave him great joy. James was the son of the late Cecil and Mabel Stewart .  He was preceded in death by sister: Mary C. Jordan . James is survived by his wife of  55 years, Iris, daughter: Leslie Rolfe and husband Rod, of Pinehurst,  sons: Rodney Stewart and wife Jane, of Carthage, Brian Stewart, of Greenville,  grandchildren: Jonathan Stewart and wife Abigail, of Wilmington, Elizabeth Parnell and husband Brandon, of Carthage, Brianna Cunningham and husband Michael, of Clarksville, Tenn., great grandchildren:  Isabella and Haley.   The family will receive friends from 6 - 8 PM on Tuesday, August 26, 2014 at  Kennedy Funeral Home and at other times at the home. Memorials may be made to Tabernacle United Methodist Church, P O Box 395, Robbins, NC 27325 and Robbins Fire and Rescue, P O Box 296, Robbins, NC 27325. Kennedy Funeral Home is assisting the Stewart Family Condolences may be made to pinesfunerals.com