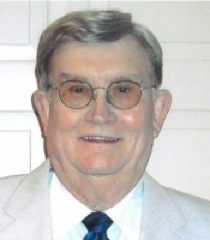 CARTHAGEA‚A
James Robert Sullivan, Jr., age 86, of Carthage passed away peacefully Tuesday (October 9, 2012) at HCR Manor Care in Pinehurst.
Funeral services will be 11:00 AM Friday at Carthage United Methodist Church conducted by the Rev. Mattheue Locklear. Burial will follow in Cross Hill Cemetery.
Born in Rock Hill, SC on January 1, 1926 he was a son of the late James Robert Sullivan, Sr. and Epsee Busbee Sullivan. He was preceded in death by his wife; Frances Moore Sullivan; a sister Josephine S. Harris and a brother Bruce Alvin Sullivan.
He is survivors by: his daughter Harriett Sullivan Riley and husband John W. Riley of Siler City; brothers Jonas Barber Sullivan and William Garrison Sullivan both of Naples, FL; step-grandchildren Angie Riley Medlin and husband Jeffrey Tye, Allison Riley McKenzie and husband Christopher; five step-great-great-grandchildren. He also leaves behind a devoted lady friend Dora Anne Maness.
Robert was active in his community serving on the Carthage Town Board of Commissioners from 2005-2009 and receiving the Citizen of the Year award from the Rotary Club of Carthage. He was an active member of the Carthage Lodge A.F. & A.M. #181 of which he was a Loyal Master for 33 years and served as Grand Worshipful Master. In 2004 was was awarded Mason of the Year. He also served the Carthage Order of the Eastern Star as Grand Worthy Patron for several years.
He has been a loyal member of the Carthage United Methodist Church since 1974. Robert was employed with Fluor-Daniel, Inc. prior to his retirement in 1993. He was an avid gardener and loved to share his bounty.
The family will receive friends at Carthage United Methodist Church on Thursday from 6:00 - 8:00 PM and other times at the home.
Memorials may be made to: Carthage U.M.C., P.O. Box 70, Carthage, NC 28327, or to FirstHealth Hospice Foundation, 150 Applecross Road, Pinehurst, NC 28374.A‚A
Fry & Prickett Funeral Home is serving the family.A‚A
Condolences: PinesFunerals.com