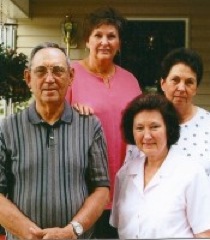 Seagrove:
Jane Dunlap Williamson 76, died Thursday, November 29, 2012 at the FirstHealth Hospice House, Pinehurst, NC.
Funeral Services will be 2:00 PM, Sunday, December 2, 2012 at Needham's Grove Baptist Church, with the Reverend James Cockram officiating. Burial will follow in the church cemetery.
Mrs. Williamson was a native of Moore County. Jane was a homemaker and a member of Needham's Grove Baptist Church. She was a daughter of the late Henry and Mamie McNeill Dunlap. She was preceded in death by her husband, Bobby Williamson and daughter, Marcia Adams.
She is survived by her son, Ricky Dunlap and wife, Teresa of Seagrove, grandchildren: Myles and Trevor Dunlap and Megan Adams, sister: Betty Parker.
The family will receive friends from 6- 8 PM, Saturday, December 1, 2012 at Kennedy Funeral Home, Robbins, NC and at other time at the home.
Kennedy Funeral Home is assisting the Williamson family.