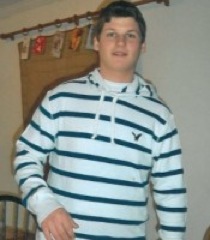 Robbins:
Jeremiah McDermott, age 23 died unexpectedly in his sleep Friday, May 11, 2012 at his home.
A graveside service will be 11:00 AM Wednesday at Pine Rest Cemetery in Robbins. The family will receive friends at Kennedy Funeral Home Tuesday night from 6:00 - 8:00 PM and other times at the residence.
A native of Moore County he attended North Moore High School and had worked at the Homewood Suites in Pinehurst. He was preceded in death by his father James B. McDermott, III.
He is survived by: his mother Joan Cole McDermott of Robbins: brother James B. McDermott, IV of Pinebluff; sister Jodi Nicole McDermott of Robbins, and grandmother, Earline Cole, of Cameron.
Kennedy Funeral Home Kennedy Funeral Home is serving the family.
Condolences may be made at www.PinesFunerlas.com