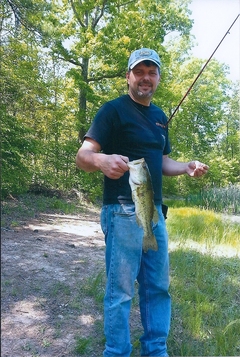 Jerry “Bryan” Brewer, 48, entered his heavenly home Thursday, July 21, 2016, at his home in Robbins, surrounded by family and friends. Funeral services will be held at 3:00 PM on Sunday, July 24, 2016  at Providence Chapel Baptist Church, with the Reverend Ralph Smith and Reverend Clyde Allen officiating. Burial will follow in the church cemetery.     Bryan was born on July 29, 1967, in Moore County to Jerry and Blanche Brewer.  He owned and operated Brewer’s Plumbing and Carpentry Repair for most of his life.  He was a family man devoted to his family and his business.  He loved the Lord, spending time with his family and listening to music. Bryan was preceded in death by his father, Jerry Allen Brewer, his grandparents, Jesse and Nellie Brewer and John and Arlene Morgan. Bryan is survived by wife of 16 years,Rhonda Brewer, his mother Blanche Brewer, his sister Sherri Brewer Beane, 5 children: Chelsey and husband, Barry, Tyler, Colby, Allen and Aidan, two grandchildren: Kolby and Kaitlyn, and 4 nieces: Lynn, Cheyenne, Yulisa and Courtney. The family will receive friends from 6 to 8 PM on Saturday, July 23, 2016 at Kennedy Funeral Home and at other times at the home. In lieu of flowers memorials may be made to assist with the funeral expenses. Condolences may be made to www.pinesfunerals.com Kennedy Funeral Home is serving the Brewer family.