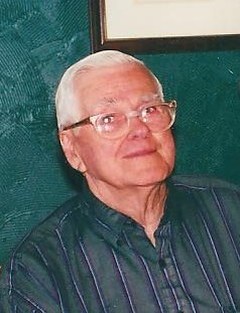 Aberdeen NC   Jesse Nelson, 94, passed away on May 8 th , 2014 after a few weeks of declining health. Born April 13, 1920 he was the son of the late Annie Nelson. Funeral services will be held at 1:00 p.m. on Monday, May 12 h , 2014 in the Chapel at Powell Funeral Home with the Reverend Archie Stevens officiating.. Burial will follow in Bethesda Cemetery. The family will be receiving friends at 11:00 am. prior to the service at the funeral home. He was drafted into the U S Army in 1942. In February of 1943 he was one of the first soldiers sent to Camp Mackall. A short time later he met and married Maude Ellen Porter. He was later sent to work with wounded soldiers in a Charleston, SC hospital and on the hospital train traveling over many states. He traveled many places and overseas with his family during his military career until retiring with 22 years of service. Later he played golf and worked in several golf shops until he opened (Spoon and Mashie) where he made many friends, played golf and enjoyed himself. He was a wonderful husband, father, grandfather, great grandfather, and great great grandfather. He will be greatly missed by all. He is survived by his loving wife, Maude of 70 years, and six children, Fred of Huntington Beach, CA, Carol McDonald (Regie) of Cary, Linda Eubanks of West End, Cindy Munn (Greg) of Aberdeen, Charles and Tim of Rockingham, and Darren (Michelle) of Aberdeen, one nephew and two nieces, 16 grandchildren. 25 great- grandchildren,6 great-great gandchildren and a very special nephew, Jamie Smith, and his 14 year old cat (Sam)who spent many years on the arm of his chair.   Memorials may be made to FirstHealth Hospice Foundation, 150 Applecross Road, Pinehurst, NC 28374 or to Moore Humane Society, 5355 NC Hwy 22, Carthage, NC 28327.   Powell Funeral Home of Southern Pines is in charge of the arrangements. Condolences at: www.PinesFunerals.com