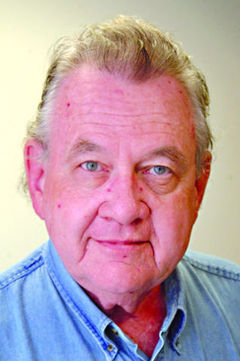 Mr. John Fredrick Chappell, only a week shy of his 76 th birthday, passed away peacefully in the comfort of his home in Carthage, NC surrounded by family. Even in his last days, he faced his illness bravely, with courage, dignity, and of course, a perfect cigar. John was a true inspiration, both in the way he lived, as well as the way he died. Born in Winston-Salem, NC to Brownie and Fred Chappell, John spent his early childhood in Hemp, NC (now Robbins) then moved to Southern Pines at the age of 6. After graduating from Southern Pines High School, he went on to receive degrees from Wake Forest University, Southeastern Seminary, and Union Theological Seminary. His areas of study included physics, mathematics, philosophy, and theology. John took a strong interest in the Civil Rights Movement after meeting and taking classes from his mentor and lifelong friend, Professor Emeritus Dr. George McLeod Bryan at Wake Forest University. In 1968, Mr. Chappell married his first wife, Laura Jordan, and moved to Atlanta to focus on grassroots organization for the movement. John was outspoken and dedicated to equality for all; he had a sense of responsibility to enlighten the world to a different perspective. Although he had a significant interest in formal education, John had a true passion and commitment for the arts. He began performing magic at the age of 10, and participating in local theater as a student in high school. Mr. Chappell continued to mystify and bewilder audiences with his wonderful wizardry until his final days. He was involved with the Lost Colony summer production in Manteo, NC during the early 60’s, an experience that cemented his love for live theater. John became well known for his one-man rendition of Mark Twain across the United States, performing the show for over 40 years. He also brought the show across the high seas during his tenure working for Royal Viking Line Cruises. Along with Mark Twain on Stage, John performed throughout the country as Clarence Darrow, Charles Dickens and Benjamin Franklin. He spent over two decades in Hollywood, California pursuing his career as an actor with parts in movies like “10”, “Brubaker”, “Fast Break”, “Nickelodeon”, and series such as “The New WKRP in Cincinnati”, “AfterMash” and “Simon and Simon” (produced by longtime friend Bill Dial). During the early 1980’s John married his second wife, Katharine McLeod and decided after their only son was born in 1988, to settle down on the east coast again. Although, he took parts from time to time, and continued to perform Mark Twain on Stage, John focused his time on being a great father to his son. In the mid 1990’s Mr. Chappell took what he considered to be “his first real job” at IBM in Raleigh, NC as a thinkpad laptop technician. He enjoyed the new experience and after a few years took a job locally as a computer specialist for The Pilot Newspaper in Moore County. His duties at The Pilot progressed in the late 1990’s to reporting after being a guest columnist for years. He had a 16 year career with the newspaper, and showcased his linguistic talent covering the northern area of Moore County and the courts in Carthage, NC. His influences in Moore County are numerous, including the formation of “Dark Park” in Robbins, and the county’s relationship with the Hunan Province in China working alongside Sen. Harris Blake. John was married for the third and final time in 2001 to Patricia Wilder Chappell, and continued to live happily in his home a mile from the courthouse until he the day he passed on. He had many accomplishments and was a true Renaissance man, from being a licensed minister, a teacher, reporter, Kentucky Colonel, philosopher, master magician, humorist and so much more. Mr. Chappell enjoyed new experiences and loved to travel, visiting many different countries throughout his life. He was fascinated by everyone he encountered, and taught those around him to appreciate the unique perspectives of other’s lives. During the last few months of his life he continued to perform magic, inspire others, and spend quality time with family, friends, and of course his beloved pets- Macy, Riley, and Jack. He is survived by his wife of 13 years, Patricia Chappell; son, 26, John Andrew Bryan Chappell of Southern Pines; sister Mary Elizabeth Ragsdale and brother-in-law Bernie Ragsdale of Beaufort, SC; brother George Chappell of Harriman, TN; nieces Ashley and Shannon, Adonia, and Moriah; nephew Adam; grandchildren Ashleigh, Douglas, Brianna, and Jacob; grandnieces Bella, Katie, Sidney, Addie, Sophie, Lucy, Lili-Beth and Vivi; and step-sons Stephen Cain and Patrick Owens of Carthage, NC. A memorial service will be held at the Sunrise Theater in downtown Southern Pines, Wednesday March 11 th , 2015, from 1pm until 3pm.  A private interment will be at a later time. Donations are asked to be made to First Health Hospice in Pinehurst, NC.