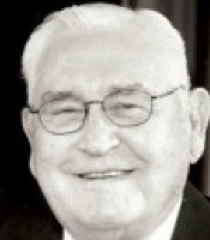 John Lennig Frye, Sr., passed away Friday morning, October 7, 2011. A lifetime resident of Robbins, NC, he was born on November 14, 1919 to Charles C. and Alma Greene Frye. A graduate of the Elise Academy, 'Dink' attended Elon College on football and baseball scholarships before being drafted to serve in the U.S. Army during World War II. He served with the 43rd Infantry Division, 172nd Regiment, in the Pacific and made five beachhead landings, including Guadalcanal, New Georgia Island, Rendova and Arundel. He received the Bronze Star and Combat Infantry Badge among other military awards and decorations. After returning from the war, he began operating John L. Frye Co., a general department store and railroad cross-tie business which was started in 1896 by his father and was at one time the largest independent cross-tie brokerage in the United States. He served on the Town Council from 1950 to 1979, serving as mayor of Robbins from 1958 to 1979. He was a member of the Board of Directors of First Bank and had served in the past on the Board of Trustees of First Health Moore Regional Hospital. He was invested into the order of the Masons. He was also the recipient of several community service awards, among them, The Distinguished Citizen Award in recognition of his outstanding leadership in 1981. He was a lifetime member of Elise Presbyterian Church and served as a Deacon and Elder. Dink was predeceased by his wife of 48 years, Lou Hardy Frye, his sisters, Aureade Frye, Helen Muse, and his brother Cameron Frye. His survivors include his children, the Reverend Dr. John L. Frye, Jr. (Denise Deibler) of Gastonia, N.C., Martha Frye Baker (Thompson S., II) of Ponte Vedra Beach, FL., Mary Frye Erwin (John) of Burlington, NC, and his grandchildren, John L. Frye, III, Mary Cameron Baker, Julia Baker, Sam Baker, Will Erwin and Jack Erwin. He is also survived by his special friend, Betty Britt Morphis and her dear children, Barry, Eddie, Rob and Donna. The visitation will be held at the Kennedy Funeral Home, 241 Middleton St., Robbins, on Sunday, October 9th from 6:00 - 9:00 PM. Funeral services will be held at Elise Presbyterian Church , 200 N. Middleton St., Robbins, on Monday, October 10th at 11:00 AM. A private internment with full military honors will precede the funeral at Pine Rest Cemetery.
In lieu of flowers , donations can be made to Elise Presbyterian Church's Building Fund, P.O Box 637 Robbins, NC 27325, Foundation of First Health, 150 Applecross Road, Pinehurst, NC 28374 or Elon University, c/o John Frye Athletic Scholarship, Campus Box 2500, Elon, NC 27244.
Condolences may be made on line at www.pinesfunerals.com
Kennedy Funeral Home is serving the Frye family.