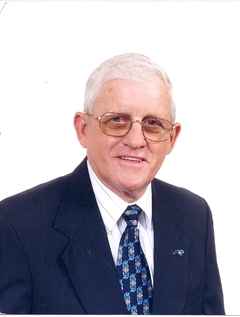 Joseph "Frank" Kennedy, age 84, of High Falls died on Wednesday, January 28, 2015 at the First Health Hospice House in Pinehurst, N.C. A funeral service will be held at 1:00 pm Saturday, January 31, 2015 at High Falls United Methodist Church, 324 River Road,  High Falls, N.C. with the Rev. Tony Baurichter and Rev. Robert Kidd officiating.  Burial will follow in the church cemetery.  The family will receive friends following the service in the church fellowship hall and other times at the home. A native of Moore County, he was a barber and an insurance salesman by profession.  He was very proud of serving his country in the US Army during the Korean War.  He was a Mason, a member of the Lion's Club, a former Moore County School Board Member and served as the Fire Chief of the High Falls Fire Dept. for many years.  He served as a Director of the Randolph Electric Membership Corporation for 27 years until his health began to decline.  He was an active member of his church and loved singing in the choir.  He was an avid golfer and looked forward to meeting up with his twin brother, Jack Kennedy and all of his good friends each week. He was preceded in death by his mother and father, Richard "Buck" and Maude Davis Kennedy and his brother Vincent Kennedy. He is survived by his wife of 63 years Eva Mae Kennedy, sons Frankie Kennedy and wife Marlene of High Falls, N.C. and Timmy Kennedy and  wife Regina of Troy, N.C.  Grandchildren Julia Russell  and husband Jonathan of High Falls and Daniel Kennedy and wife Jennifer of Robbins, N.C., Aaron Babson and wife Natalie of Holly Springs, N.C., Dylan Kennedy of Raleigh, N.C., and Anna Kennedy of Troy, N.C.  Brother Jack Kennedy and wife Edith of Robbins, N.C., sister Lois Butler and husband Marion of Robbins, N.C., sister in law, Clara Jean Kennedy of High Falls, N.C., and 6 great grandchildren, many nieces and nephews. In lieu of flowers donations can be made to High Falls United Church, P.O. Box 12 , High Falls,  N.C. 27259 or FirstHealth Hospice and Palliative Care, 150 Applecross Rd. Pinehurst, NC 28374 Kennedy Funeral Home is assisting the Kennedy family. Condolences may be made online at www.pinesfunerals.com