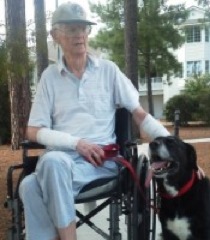 Southern Pines, NC
Joseph Henry Carter, Jr., age 90 of Southern Pines died Sunday (March 17, 2013) at St. Joseph of the Pines Health and Rehabilitation Center in Southern Pines.
A memorial service will be held at 4:00 PM on Wednesday, 27 March at Powell Funeral Home.
A native of Cumberland County he was a son of the late Joseph Henry and Marion Kennedy Carter and was a US Navy veteran of WWII. He began his long career as an optician early in his life working for H.M. Smith Opticians and later as a partner in Hall and Carter Opticians. In 1977 he bought the business and worked many years in Southern Pines and Pinehurst as J.H. Carter Opticians before selling the company to Sandhills Optical Company, where he remained as an employee. He retired in 2002. He was an avid golfer and fisherman.
He was preceded in death by his wife Eleanor Smith Carter, who passed away in 1994.
He is survived by his son Joseph H. 'Jay' Carter, III of Southern Pines.
Memorials may be made to: Sandhills Ecological Institute, 515-E Midland Road, Southern Pines, NC 28387.
Powell Funeral Home in Southern Pines is assisting the Carter family.
Condolences: PinesFunerals.com