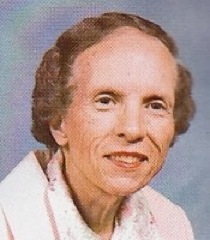 A graveside committal service at 1 pm on Sunday, April 29, at Pleasant Hill United Methodist Church followed by a Memorial Service at 2 pm at Tabernacle United Methodist Church, Robbins. Reverend Carl Matthews and Reverend Mike Weber will officiate.
Born May 20, 1925, Miss Williams was a daughter of the late Claude and Angie Purvis Williams of Robbins. She was preceded in death by two brothers, Junius Williams of Robbins and Cleo Williams of Broadway, as well as a sister Lucille W. Maness of Robbins. Kathleene became a member of Tabernacle United Methodist Church, Robbins, in 1933. There she was a member of the choir for 47 years, a member of the Merritt Sunday School Class, served on the Worship Committee, Administrative Board and the Trustees.
Kathleene began her career at Milliken Mills shortly after her high school graduation from Elise in 1943. One of her first positions at Milliken was as a Red Cross Nurse. She worked at various jobs during her many years at Milliken. Kat was a devoted daughter, sibling and much loved aunt. She also raised chickens to help support and care for her parents as well as her nieces and others. She will be missed by family and friends.
Kathleene is survived by nieces Mary Lou Kelley of Asheboro and Donna Harrell and husband Joe of Whispering Pines and Tennessee. She was blessed to have special friends Robin and Harry Frye, who also helped with her care.
The family will receive friends at the Tabernacle United Methodist Church Fellowship Hall following the Memorial Service.
In lieu of flowers, memorials may be made to Tabernacle United Methodist Church, P O Box 395, Robbins, NC 27325.
Condolences may be made online at www.pinesfunerals.com