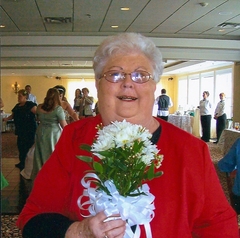 Robbins, NC   Laverne Powers Cockman, 78, of Robbins, NC passed away at her home September 2, 2016.   A funeral service is planned for Sunday September 4, 2016 at 3:30PM at Pleasant View Friends Church, Eagle Springs, NC officiated by Reverend Jacelyn Jones and Reverend Don Luellen   A visitation will be held at the church prior to the service beginning at 2:00PM and other times at the home. Burial will be in the church cemetery   Born August 17, 1938, LaVerne was the daughter of the late Hayes and Blanche Maness Powers. She was a graduate of Elise High School and Bryce Commercial College.   She worked at Carthage Fabrics for 35 years, retiring in 2000 as the office manager. Laverne enjoyed camping with family and friends for many years. She was a faithful and devoted servant of the the Lord at Pleasant View Friends Church where she served as the pianist for over 60 years.   She was preceded in death by her husband of 50 years, Lester Cockman, who passed away in 2006.   She is survived by two sons, Dale Cockman of the home, Don Cockman (Tammy) of Camden, SC, two grandchildren Jonathan Cockman of Columbia, SC and Lindsay Cockman of Charleston, SC, sisters Vera Warren and Annette Caldwell of Robbins, NC, brother Walter Powers (Diane) of North Myrtle Beach, SC and brother Frankie Britt of Robbins, NC.   Memorials may be made to Pleasant View Friends Church at 13542 Hwy 24/27 Eagle Springs NC 27242   Kennedy Funeral Home of Robbins, NC is assisting the family.