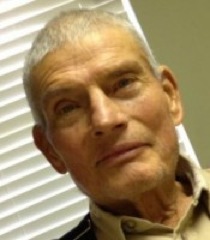 Robbins, NC
Leroy Q. Williams, age 87 a lifelong resident of Robbins died Saturday (November 9, 2013) at FirstHealth Hospice House in Pinehurst.
As was Mr. Williams request there will be no funeral service.
Memorials may be made to: FirstHealth Hospice Foundation, 150 Applecross Road, Pinehurst, NC 28374.
A native of Moore County he was one of thirteen children born to the late James Addison and Culbreth Maness Williams. He worked for 47 years as a Fixer for Milliken/Robbins Mill and also farmed. He was a hard worker his whole life. Leroy never married, but had a great love for his family and was very knowledgeable in his family history and genealogy.
He was preceded in death by 11 of his brothers and sisters.
He is survived by: a brother Eugene Williams of Eagle Springs; nieces Amanda Williams of Carthage and Helen Blakely of Charlotte; great niece Angela Brown and great nephew Kenneth Brown both of Carthage.
Kennedy Funeral Home is assisting the Williams family.
Condolences: PinesFunerals.com