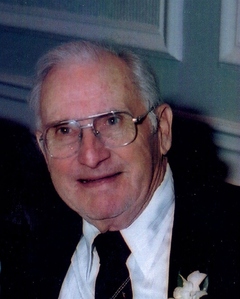 Leslie Henderson Britt, age 92, of Robbins, NC passed away peacefully in his sleep on Tuesday, March 7 th , 2017 at Courtland Terrace Rehabilitation Center in Gastonia, NC.   Funeral services will be held at 3:00 PM, Sunday, March 12, 2017 at Robbins First Baptist Church, where he was a member, with the Reverend  Danny Meetze and Reverend Kenneth McNeill officiating, burial will follow in the Eagle Spring Baptist Church Cemetery. The family will receive friends prior to the service beginning at 1:30 in the fellowship hall of First Baptist Church, 651 E Hemp St, Robbins, NC 27325. A native of Moore County, Henderson was born on March 13, 1924 to Leslie C. Britt and Florence Campbell Britt.  Henderson was very involved in his community, serving in many capacities: founding member of the volunteer fire department and rescue squad, managing editor of the The Robbins Record, town Councilman, Boy Scout leader, and water plant manager.  Henderson was active in Masonic Lodge #555, holding numerous positions including Master of his lodge.   Henderson was an avid reader and continued his quest for knowledge up to the day he died.  He loved to listen to, make, and teach music and even made his own fiddle.  He passed on his love of music to his grandchildren and great-grandchildren, who will always remember him best with a guitar in his hands. When he wasn’t reading or making music, he could usually be found outdoors.  He and his wife Dorothy loved to share the bounty from their garden with all of their friends and family In addition to his parents, Henderson was preceded in death by his sisters: Irene Thomas, Virginia Parker, and Lelia Gentry and by his great-grandson Aiden Shin.   He is survived by his wife of 73 years, Dorothy and his son and daughter-in-law, Gary and Brenda Britt.  He is also survived by his grand-daughter Lori Shin, her husband Rob and their sons Caleb and Noah and his grand-daughter Angie Brinkley, her husband Jason and their daughters, Ava and Isabella. In lieu of flowers, donations may be made to Elise Lodge #555 AF&AM, P O Box 66, Robbins, NC 27325 or Robbins Fire and Rescue Squad, P O Box 987, Robbins, NC 27325. Kennedy Funeral home is serving the Britt Family. Online condolences may be made at pinesfunerals.com