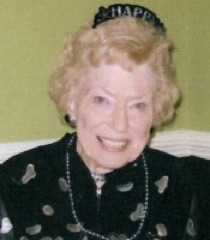 SOUTHERN PINES
M. Jane Prosser, a longtime resident of Whispering Pines, then Pine Knoll in Southern Pines, NC died December 27, 2012 at St. Joseph of the Pines Health Center. She was born in New York City on July 21, 1919. She attended business school and then embarked on a long career with Metropolitan Life Insurance Company in NYC. Jane married G. Donald Prosser after WWII ended. She had learned of Don through friends and had sent him a Christmas card while he was serving in the Pacific in the Army during the war. She became executive secretary to the CEO of Met Life and Don became an executive at Hartford Insurance Company. They spent a long and wonderful life together. The couple retired in their early 60's to pursue life in NC, enjoying golf and bridge.
Jane was an elegant woman, a 'clothes horse' in her own words, who loved reading, Broadway Musicals and most of all, her friends. She was a marvelous cook, gracious hostess and excelled in organizational skills. Her nieces and nephew benefited from her loving attention. Jane had the distinction of making a hole-in-one when she was in her mid 80's.
She was predeceased by her husband and two sisters. She is survived by her brother, Jay (Phyllis) Horton; nieces, Susan Stevens (Stan) Collins, Wendy S. (Ed) Rex, Nancy Jane (Wally) White and Penny Plueckhahn; and nephew, Ogden Merrill. The family is particularly grateful to Rose Paige and Rebecca Purdy for their loving care.
Powell Funeral Home in Southern Pines will handle arrangements. There will be a memorial service and reception at the Pine Knoll Chapel at 2 pm Wednesday January 2. Memorials may be made to:
Heifer International
PO Box 8058
Little Rock AR. 72203-8058
Online condolences at www.PinesFunerals.com