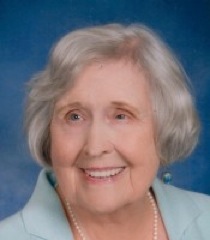 Mae Wheeler Boyer Cooper of Pinehurst died July 18th, 2013.
A memorial service will be held at The Village Chapel in Pinehurst on Monday, July 22, 2013 at 11:00 a.m. A reception will follow the service at the Church.
A native of Franklin County she was a daughter of the late Willie Clifton and Daisy Cash Wheeler. She attended Campbell College and the University of North Carolina at Chapel Hill. She was a member of The Village Chapel and the Women of the Chapel in Pinehurst.
For several years of her life she lived in St. Petersburg, FL. While there, she became a charter member of the Shore Acres Presbyterian Church and served as president of the Women of the Church. She was also a member of the Sunset Country Club, Snell Island and St. Petersburg Yacht Club and was a 'Salty Sister' of the Club.
Mrs. Cooper was a proud member of the following: United Daughters of the Confederacy, John Blue Chapter, Aberdeen, NC, National Society Colonial Dames XVII Century, charter member of Deep River Chapter, Southern Pines, NC, where she served as Chaplain, President, Vice President, Parliamentarian, Historian, and Third Vice President.
She served as organizing President of the Pinehurst National Society of Southern Dames of America, and served on the National Board as Third Vice President and Chaplain. She was a lifetime member of the National Society, Daughters of Founders and Patriots of America, where she served as Chaplain. She served as Vice Regent and Regent of the Alfred Moore Chapter, National Society Daughters of the American Revolution.
She was a member pf The Arts Council of Moore County, a life member of the Historical Association of Moore County, The Weymouth Center for The Arts and Humanities, and Clan Donald USA.
In addition to her parents, she was preceded in death by her husbands, William T. Walters, Col. Joseph Boyer and Walter C. Cooper; sisters, Daphyne Columbia Wheeler, Eleanor Wheeler Faison, Jacquelyn Wheeler Hedrick, and Lois Wheeler Edwards.
She is survived by a son, William L. Walters; a daughter, Kathryn Walters Gilmore; granddaughters, Ruth Michelle Holroyd, Lee Anne Walters; grandson, Robert Wheeler Walters; great grandsons, Samuel Tatum Holroyd, Elijah Robert Walters, Alexander Corley Walters, and Nicholas Eland Walters.
She will be remembered by her quick wit, her keen sense of humor, her warm personality and smile, her love of people, and her willingness to help others.
Memorials may be made to The Village Chapel, Village Green,Pinehurst, NC 28370-1060