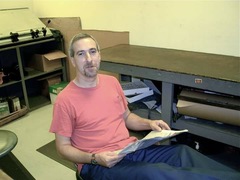 Michael Tyhanic was one of the greatest guys you could ever meet. He definitely lived life by his own rules. Whether that meant hanging with friends, blasting good tunes, shooting some pool (which he was a pro at back in the day) or just having a good time. Drumming, writing, cracking jokes, dreaming of being a pilot or just delivering the news were just a few of his MANY interests. He was for sure a partying kind of guy...right up until the end. Always looking for a good time, but that never meant at other people's expense...FOR SURE!!! He took care of his family the best that he knew how, and did an amazing job of that. Despite any flaws that he might have had (or that any of us have for that matter) he had a heart as pure as GOLD. Would give you the shirt off of his back if that meant helping you out. "Generous, worldly, funny", these are just a few of the words that come to mind when thinking of him...oh, and "smart-alec" too. You would never think that a guy who had been all around this country (and we're talking about almost 40 states, including the country of Mexico) would've been so down to earth. Raised a devout Catholic, and pretty much knew EVERYTHING about that religion and much more. A true product of the 60's though, and what a product he was. "Fly by the seat of your pants, no rules, do what you want within reason & have fun" these were just a few of his many sayings. "Have a blast, life's just too short to be working all the time" was one of his favorites. Mike was truly a man up for any adventure...no matter how small, big or risky...that was part of the fun for him. You will be sorely missed...RIP. Some of his most dear friends and family are list below (in no particular order). And believe me...there's MANY MORE!!! Stephen Jake Tyhanic Teresa Joy Johnson Tyhanic Johnathan Johnson Patrick Nugent Joe Louro Eddie Johnson Glen Sides Donny Pereson Robby Snyder Dennis Cherry Pat Cherry Tim Maher Bud Ramsay Bobby & Peggy Mach Artie O' Hara Mike & Kate Hajack James Utly Jimi Longworth Joree Sykes Ken Bingert Jaclyn  Bingert Benjamin Douglas Wayne Gomillion Linda Gomillion Please don't feel obligated but donations to pay for all costs would be much appreciated...every little bit would make a HUGE difference. Donations can be sent to: Teresa Joy Tyhanic 31 Birdie Drive Whispering Pines, NC 28327-9300