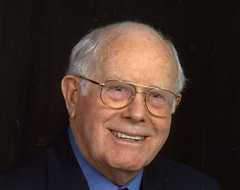 Paul L. Thomas, age 91, went home to be with the Lord on Friday.  He died peacefully at his home surrounded by his loving wife and family.

Funeral services are planned for 11:00 am on Monday (June 9, 2014) at Cameron Presbyterian Church conducted by the Rev. Whitney Wilkinson.  Burial will follow at church cemetery.  The family will receive friends at Fry & Prickett Funeral Home on Sunday from 5:00-7:00 pm. and at other times at the home.

A native of Moore County he was the son of the late Melvin Curtis Thomas and Mary Belle Kelly Thomas.  He was a long time member, elder and deacon at Cameron Presbyterian Church and a US Navy veteran serving during World War II on the USS Henry A. Wiley.  Paul owned and operated Thomas ESSO and Farm Supply in Cameron from 1947-1974.  During his retirement he enjoyed flying his Bonanza in his free time, traveling and spending time in the NC mountains, taking extended canoeing trips. He was very proud to be a part of the Triangle Flight of Honor on October 7, 2010.   He served on the BB&T Board of Directors for 30 years. Paul was a loving and caring husband, father, grandfather, brother & friend.  His family ment more to him than anything and all those who loved him will miss him very much.  He was preceded in death by his first wife, Phoebe Measamer Thomas; a son, Mark Lewis Thomas; five brothers, Dan Thomas, John Thomas, Henry Thomas, J. W. “Toopie” Thomas and Bobby Thomas; two sisters, Dorothy Gaddy and Rebecca Carlyle.

Online condolences may be made at www.PinesFunerals.com.