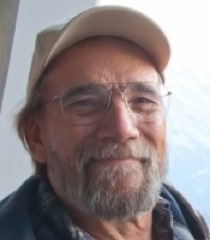 Carthage, NC
Philip H. 'Skip' Vetter, III age 68 died Wednesday (January 9, 2013) at his home.
A Celebration of Life will be 2:00 PM Saturday, March 9th at the Carthage Community Building (Old Town Hall)
Skip was the only son of the late Philip Henry Vetter, Jr. and Thelma Lee Vetter, and lived in Rockville, MD. In 1965 he married Charlotte Tabler Vetter, also a native of Rockville. He and Charlotte and their son Brian moved to Moore County in 1978 and made their home in Carthage. He was a US Army Veteran of Vietnam and a clock designer for the Ingraham clock company in Laurinburg. He operated an art gallery in Southern Pines where he became known for his artistry - his prints of birds and detailed drawings of trains adorn many Moore County walls. He was also an accomplished carpenter and woodworker, building his home and working on several others for friends over the years. When he retired he and his wife Charlotte began touring the eastern seaboard in their RV, going to the coast and the mountains, and attending music festivals. He became an avid and very skilled photographer, sharing his work on a flickr website for all to enjoy.
Skip had been diagnosed with a very aggressive form of lung cancer five years ago, but he chose to doggedly keep on living his life. He was always there at Merlefest, though some years not feeling so great because of his ongoing treatments. Skip was a great fan and friend of the Kruger Brothers, and regularly traveled with them, including trips to Europe and Canada, the most recent being last summer to attend the premiere of 'The Spirit of the Rockies.' He refused to stop living, seeing friends, spending time with family, traveling when he could, photographing the beauty of the world around him and sharing it with others. On his flickr photo page he listed his occupation as 'trying to make the most of every day', and that is exactly what Skip did.
In addition to his wife Charlotte he is survived by his son Brian Vetter and wife Shannon of Apex; an uncle Elmer Vetter and wife Ida Belle of Moorefield, WV; an aunt Mary Susan Ware of Bel Air, MD and his beagle Emma.
In Lieu of flowers memorials may be made to: FirstHealth Hospice Foundation, 150 Applecross Road, Pinehurst, NC 28374, or to the donors favorite charity.
Fry and Prickett Funeral Home is assisting the Vetter family.
Condolences: PinesFunerals.com