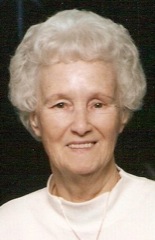 Graveside services will be 2:00 PM Sunday at Pine Rest Cemetery.

A native of Danville, VA she was a daughter of the late Robert A. and Elizabeth Woodson Guill. She was preceded in death by: her husband Leonard Brown who died in 1996, daughter Anne Hussey and a son Donald Brown.

The family will receive friends at Kennedy Funeral Home Saturday from 6:00 " 8:00 PM and other times at the residence.