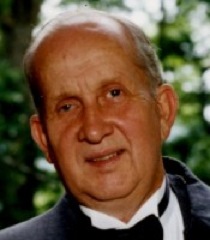 Joseph Rayford 'Ray' Millikan of Eastwood, NC died peacefully at home on October 10, 2010. He was 80 years old.
Ray moved from Greensboro NC to Eastwood in 1967 with his wife, Jean Harris Millikan to raise their family. He was a Korean War veteran had an entrepreneurial spirit which included appliance repair, fire fighting, sales and teaching. He was retired from the Eastwood Fire Department and Moore County Schools. Ray loved life and even more, his family and friends. He will be missed by many.
He is survived by his wife of 55 years, Jean Harris Millikan and 4 children: Anne Millikan Palmer and her husband David S. Palmer of Simpsonville, SC; Alan R. Millikan and his wife Kathleen of Chapel Hill, NC; Meredith Millikan McDiarmid and her husband Danny of Apex, NC and H. Keith Millikan and his wife Kerry of Pinehurst, NC. Ray had eight grandchildren, which he loved dearly and include: Kalyn Palmer Caballerro and Korey Scott Palmer; Zachary and Sam Millikan, Hannah and Megan McDiarmid; Will and Drew Millikan.
Visitation will be at Fry-Prickett Funeral Home in Carthage, NC on Wednesday, October 13, 2010 from 6-8 PM. The funeral will be at Fairview Baptist Church in West End, NC on Thursday, October 14, 2010 at 2 PM.
Memorials may be made to the Eastwood Fire Department, Fairview Baptist Church or First Health of the Carolinas.